This work is one of the subjects of Peggy Rubin’s 2016 Writing Retreat, where she will develop aspects and components of The Book of the Lady.

In 1999, while attending a conference in Ireland devoted to the Sophia, great lady of divine wisdom, I received an “inner” assignment: “Begin compiling a Goddess Bible.” This inner directive described the need to reawaken to the presence of the Feminine Face of God, and to find ways of fulfilling that need, through telling and writing stories intended to serve well the next generations.

During these past years, many Sacred Theatre workshops have been devoted to an exploration of people’s experience of the Divine Feminine and her multitudinous faces, many of them veiled or otherwise hidden from us by our Western culture and ideology. Much of the work has been through the processes of imagination, and dreams, and our desire for a feminine god, or at least a female partner to the male god. We have studied Her history and traditions, journeying to many places in the world where the Great Goddess survives in landscape, mythology, and in modern worship, primarily as the Holy Virgin. Many of us have felt a touch of Her presence in ancient temples, on holy hillsides, at the edges of the sea, or deep in the crypts of cathedrals.

Preparing for one of those journeys, “In the Footsteps of The Lady,” I read a remarkable book, called When They Severed Earth From Sky: How The Human Mind Shapes Myth. The authors, Elizabeth Wayland Barber and Paul T. Barber, clearly state that not a single archetype or god is present in their work – they set forth the theory that our minds “create” such forces as gods, and stories about gods, when we experience some ferocious overwhelming cataclysm. They describe several world-shaking events of the distant past – volcanic explosions, huge earthquakes, monstrous tidal waves – and demonstrate how these must have affected the brains and minds of survivors. These catastrophic events set the basis for many of our belief systems.

As humans, we love stories, and we like to add our own versions to those we hear; so our ancestors adjusted, added on, and corrected the stories, and after many generations these stories came together into something that could be called religion. Naturally new wisdom was generated by great people of spirit: teachers, prophets, visionaries, poets, artists; they added their knowledge and brilliance to the mix. From all this, vast traditions were created; each intended to sustain and nourish those people nearby, living within a shared landscape, all bearing the collective ancestral memory of the cataclysms that shook that landscape in the beyond-history past.

Sometimes the teachings seemed so powerful, so vital to the human spirit, that they inspired a desire among followers to share the teachings with others from other lands. This movement of the tradition, or the religion, across space and time gave rise to an outpouring of further stories – celebrating the ways the good news made its journey from India to Tibet, for example, or from the land of the Huron to the lands of the Seneca, or Jerusalem to Rome, or Arabia all the way to Spain and Java. These in turn inspired others to create records of the teachings, records of the traveling stories – on palm leaves, papyrus, tree bark, and in the vast caverns of human memory.

Finding ways to commemorate these stories, and the miraculous events accompanying them, inspired still others to honor the story by creating mounds, cave drawings, monuments, temples, mosques, shrines, psalms, books of wisdom teachings, sculptures, paintings, oral traditions, laws, ceremonies, scriptures, and by setting aside specific places on the face of the earth as home for the unseen holy ones.

Painfully, many traditions traveled with invading armies, representing a tribe or nation wanting more influence, more riches, and more land. These onslaughts extended tribal influence to the point of empire, but the results also included an incalculable loss of human life, human culture, and human gods. So it has been in recent conquests, which have devastated many of the people whose traditions were based in understanding and cherishing the earth. A much earlier series of conquerors laid waste to worshipers of the Female God. A tiny fraction of all these “old ways” still survive, in songs, folk tales, place names, human memory, and human imagining.

Today’s catastrophes, terrifying as they are, may yet instill in us a capacity that will “sever us” from the need for conquest, the arrogance of material riches, the brutal misuse of the earth’s resources, and bring us to renewed appreciation of ancient earth-based ways of knowing, as well as invite us to create a sense of Divine partnership and balance even as we grow toward deeper appreciation of human male/female partnership.

We now know enough about the way the universe works that we can trace the power of an intention or a story or an idea to make its way into consensual reality. Once experienced by a reasonable number of people, the idea – or the god – can take on a life of its own, and become as “real” as we are. So it has been over the ages of humanity

This is not to suggest that there is not an already existing, all-permeating, all-creating force that is the One True God, beyond all duality and all human stories. However, I do not have the imagination to hold such a One. No god I can imagine could possibly be the real One.

But I can make up wonderful stories about a god I would like to believe in. And the One who brought the cosmos into being has created this universe in such a way that we can affect it, we can intend and create something truly rich and strange from the realm of all possibility. And with enough time and belief – and the all-important telling of the stories – that god would come to exist, or to have as much existence as any living thing can be said to have. And the more I believe, the more actions I take in support of that belief, the more real that god becomes. The more love letters I write to the great god I imagine, the more hymns and praise songs I invent for this god, the more I bring Her/Him (or both) into being. And the less time I have to moan about the state of the world, or whine about how hopeless it all is.

Thus, the Book of the Lady Project today (the Goddess Bible) and now called The Gospel According to Her has evolved into a means for inventing new stories of partnership, friendship, love, and creation between and among the gods, male and female. All the gods and all the stories we can devise, imagine, remember and honor. And asking these gods in their highest playfulness to take up residence in our souls, so that we may have the juiciness and joy to bless the world and all Her children.

You are invited to participate. Here are the ground rules about the Book of the Lady Project:

“It will never be finished, or complete;
it is an open-ended book.
It will never be the foundation for a religion, or create any reason for one person to hate another.
It is written to celebrate The Lady, and it cannot be anti-male.
Stories can include aspects of Her presence in all things, her myriad and pleasurable relationships with the Masculine God — as His mother, lover, sister, spouse, daughter, muse — as well as tales about her workings when she seems to be alone.
Every person and every being carries a part of Her story.
No one who wants to be included can be left out.”

What might a Great Goddess have to say today to modern women and their daughters? Men, too, of course. What does she want; how does she appear? What is her role in human life, in planetary life, now in this moment? What would we like her to be? What can we do that will enhance her?

I believe she is present in women’s lives, as we live them, and by centering on her aliveness, we can begin to express her fully and effectively. Our work is to seek her, discover her, invite her, celebrate her and know her to be unfailingly present and cherishing in every season of our lives. And to embody and live that truth for our daughters’ sakes – and sons, husbands, brothers, lovers, too. Most important, to tell the story of her aliveness in and around us every where, through all the seasons of life. Meditate, study, ponder, and then begin to create hymns, laments, prayers, praise songs, art, designs, and stories, stories, stories.
It’s helpful to consider a pattern of Her life in our lives. Perhaps this one will inspire you to remember, or make up, a truth about how she revealed herself through these “Nine Seasons: Stages of a Woman’s Life.”

• Care for the Generations

• Return to One Soul

Give Beauty and Wisdom to a Friend

THE LADY’S YEAR FOR JOY Calendar: Anchor your day to day life in Joy. 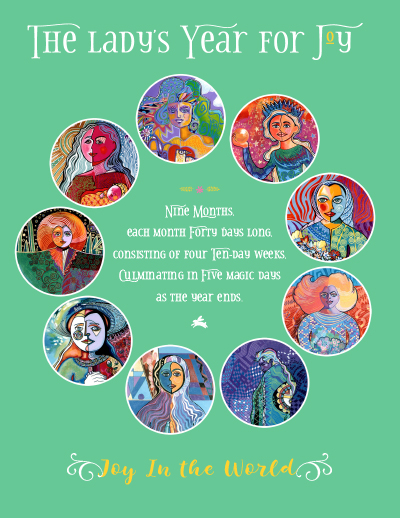 MORE DETAILS AND BUY IT HERE