Led by the Labyrinth

As I remember it…

Thirty years ago, on January 10, 1987, to be exact, a new adventure for the Labyrinth began. 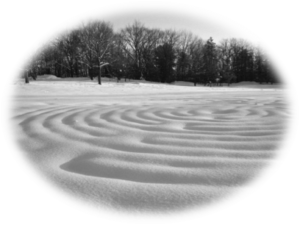 Scene One: A Vision in the Snow

A snow-covered open field near the “Field House,” a huge gymnasium, on the grounds of the Greenkill Conference Center in upstate New York. The snow is several feet deep.

Jean Houston and Robert Masters are offering the initial session of a two-week residence as part of a three-year training program in Human Capacities.

Robin Van Doren, Jean’s teaching partner, who has a vision. Frank Hayes, assistant to Jean, and veteran of an earlier course.

Betty Rothenberger, also a veteran of the earlier training, guide and mentor to first time students.

The Call to the Labyrinth:

The labyrinth has served as a symbol of Jean’s work for many years; she is devoted to the study of primal patterns, and inspired by a mysterious story called “Dromenon,” by Gerald Heard, she calls the labyrinth Dromenon. This name comes from the ancient Greek mysteries, which included “things done,” “things heard,” and “things seen. “ Dromenon is the word given to things done.

Robin Van Doren envisioned a huge Dromenon laid out in the snow in that field at Greenkill. She spoke of this to Jean and then spearheaded the engineering program needed to dig the pattern in and through the snow. Her helpers included Frank, Betty, and Anne, and many others.

As twilight came down, the entire group gathered. Anne was stationed in the center, standing in a white cape, making it clear that the center was the place to which we were headed. Others stood at the four major quadrants and turning points, encouraging the pilgrims. Led by Frank, holding his hand in the air, and piloted by Betty, who held the pattern and called out the turns for the leader, everyone followed. We were a long chain of pilgrims, holding on to one another as firmly as possible. And we made it all the way into the center and out again. As Robin remembers it, “It was cold and increasingly dark as everyone walked with the reflections in the snow turning the world blue.”

Several students of that training program experienced the pattern as a living potency. For Sylvia Senensky, a therapist from Canada, it became a foundation of her work and her writing. Others, including Ellen Weiland, Elizabeth Benedict and Brian Porter, began to create labyrinths for people to walk everywhere they visited, on the sandy shore of Lake Michigan, for

one example. Others painted it on huge canvases, making it portable. Robin had a permanent one built on the top of a hill on her property in Ojai, California. She says, “One of my sweetest labyrinth memories was of teaching a nine-year-old boy to make the pattern on a beach in Costa Rica…He couldn’t wait to get home and share how to do it with his grandmother. Beaches are such fine places to create this pattern. The pattern comes and goes with the cycles of time there.”

This is her school of spiritual studies, with the labyrinth as its primary symbol. Also, in the early years, at Greenkill Conference Center. So powerfully did this Dromenon pattern fall into the waiting world that Brian Porter elected to lay it down with masking tape on the floor of that Field House gymnasium every Friday evening so that it would be available for walking throughout the Mystery School weekend.

Lauren Artress, canon of Grace Cathedral in San Francisco, had attended an earlier Mystery School of Jean’s, and while on sabbatical, came for a visit one weekend. She walked the Dromenon. And the rest is history.

Lauren combined the labyrinth with her elegant teachings based on the inspired work of Hildegard von Bingen. She had the pattern laid inside and out of Grace Cathedral in San Francisco. Daringly she even persuaded the Church masters at Chartres Cathedral, home of the pattern, who had done their best to ignore the pagan embarrassment on the floor of their great “Cathedral of the Black Madonna,” as the French scholar Jean Markale calls it, to move the chairs off and give the public the opportunity to walk it at least once a week.

Today they acknowledge that its history is said to go back to Cretan times, when the renowned artificer Daedalus built it to wall in the Minotaur, the half-man, half-bull who demanded human sacrifice. With the help of the Cretan princess Ariadne, and her ball of thread, the Greek hero Theseus made it to the center, fought and killed the monster, and made his way out again, following the thread Ariadne had given him.

In recent times during the Easter holidays, the bishop of Chartres Cathedral tosses a ball of golden thread to people standing around the labyrinth, reminding them they are part of the web of life and held safely in the church’s arms: just stay connected! is the message.

Medieval pilgrims gave it a different meaning. If unable to make the sacred journey to Jerusalem, they could walk the labyrinth with the same intention, and achieve equal spiritual merit.

Some of today’s pilgrims travel with Lauren to study there in Chartres and to walk the sacred pattern bathed in the light of the great rose window, created to the same dimensions as the pattern on the floor, one of many mysteries and miracles created by the visionaries and builders of this queen of cathedrals.

With friends, walking the labyrinth outside Trinity Episcopal Church in downtown Ashland, Oregon, (one of several here) placed there by another for whom the pattern came as a gift of grace, power, and passion. I am anticipating the New Year’s Eve ceremonial walk guided by Elizabeth Austin, (for the 18th year) another Mystery School veteran, who participated in Lauren Artress’s course, and brought the labyrinth to this town.

This is the day when the earth’s turning begins to bring in new light. I walk the pattern, pondering the age-old weaving of darkness and light, a time when the shadows are long on this country and on our world. What is there at the center? The Minotaur to be slain, at least as he lives in me, or is there an answer and streaming light, only light?

As I understand Carl Jung’s warning about the human shadow, it’s not about lighting a candle in the dark places, but making the dark places visible. Not only is the darkness visible now (or what I consider to be the major shadow stuff of the United States, namely racism, misogyny, xenophobia, power madness, and profiteering) but also we have elected representatives of this shadow stuff to govern us.

A friend described her feeling about what’s happening: “a bag of hatred has been torn open and is pouring down on all of us.” She went on to say that grumpy people used to keep it to themselves or just make their friends and families miserable by spilling their anger, fear and hatred, but now they put it out all over social media, and ignite the same fearful streaming in others, affecting us all in a bath of hatred.

The part of our “shadow stuff” that is mine to acknowledge, mine to claim, mine to integrate, I can do. I will do. 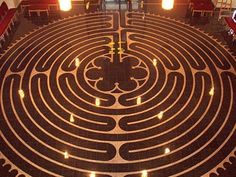 The Dalai Lama teaches that all of our angers and hatred come from fear. On this Labyrinth walk, at the turning of the year, I can lean into my fear, work my own shadow hatreds and angers, (eat them, as the poet Robert Bly advises), and pray for others also caught in these debilitating snares.

The Minotaur will not be slain by me, at least. But I can thank it for its lessons, at least one of which is new awareness of my country’s pain and puzzlement.

And there is light at the center of the Labyrinth.

Please share YOUR experiences with the Dromenon by posting in the comment box below. Your stories will be posted below:

“One afternoon Elizabeth Austin (then known as Betty Hutto) and I were flying home from Greenkill and had a few minutes at Newark airport.  I noticed that there was a huge round empty space in the departure lounge so I pulled out a small image of the dromenon to guide us as we walked an imaginary labyrinth while people sat nearby waiting for their planes. One young person avidly watched and eventually approached, joined us in the walk, and asked us what we were doing. We so enjoyed sharing the magic and mystery of the dromenon with her.”

“It was a snowy January 30 years ago that I was called to attend my first Mystery School. Yes, I was there. The labyrinth was majestically carved into the snow. We assembled, we 100+ souls hand in hand on a pilgrimage that was to have echos through the decades.  That evening as the sun set and moon rose we became one being moving relentlessly thru the curved pathways, at times orbiting far from centre, at moments a mere step away. It seemed that we recreated the phases of the moon as we trundled on, now a full circle forming, then we were a half moon waxing and waning, shaped and shifted…hand in hand, mere particles of the whole of the great whole.

Over the years that followed I dreamed of labyrinths, drew them, walked them and finally constructed one on a plateau in Costa Rica. It was auspicious. David Bowie passed on Jan.10, 2016, 29 years later to the day.  The next day I began construction. Googling the design gave me Bowie,who had appeared in labyrinth the movie. His death deeply touched me. His range creativity and heart have inspired me since I was young. I sang his songs as I moved the 100’s of rocks into place to form the labyrinth.
Is there life on mars?

I am deeply grateful for the powerful, potent snowy pathways packed down by us pilgrims as we danced the phases of the moon, and to all who journeyed that night carrying the pattern forward through time.

Thank you Peggy for the opportunity to excavate the memory.”

From Jan Sanders and Richard Sims in the snow fields of Orillia, Ontario:

“Thank you Peggy for sharing the fullness of this story of the labyrinth.

Prior to the whole group of us gathering, there was a smaller team of rag tag folks who scouted out the site, directions and centre.

As the vision was taking shape, I was in the fieldhouse.  It was as if a silent arm went through gathering a few folks who would discern where the labyrinth would be laid out.  Did Betty wink at me?  How did I know to join them?  But I did.  We went out into the snow-covered field and began to envision where we would place the labyrinth.  Whispers went throughout the small ragtag group about what we were going to create.  This was the first known time the labyrinth would be laid out.  We fumbled to lay out the 4 directions and then the centre.  How big would the circles need to be so we could all walk into the centre.  We had the sense that mystery was surrounding this endeavor. We were not alone.

I often think back to this time and realize it was when I was ‘marked’ to be part of the unfolding of the mystery school on this continent.  I’m packing today to take the teachings to Colquitt, Georgia in January and Aruba in February.  The field continues to grow.

Love to you dear Peggy and your steadfastness in bringing light to the world.”

#9 Joyful Service and Sharing #10 Birthdays of the Joyful Gods