This is your invitation to embark on
a year-long excursion,
nine months, each forty days long,
afloat on the River of Joy.
Our journey takes us
toward a deep dive into
the Ocean of Bliss. 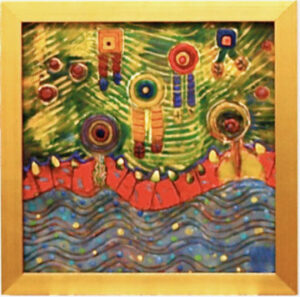 EXCURSION ONE: EXPLORING THE SOURCES OF JOY

To begin your voyage, you are invited to spend the first forty days of this new year – January 1 to February 9 — immersing yourself in those things that source you in joy. Where have you found joy; what joys sustain you; what joys bring you back to yourself during difficult times?

To find, to remember, and to refine those sources of joy, you are asked to spend some part of every day imagining you are sailing on your own River of Joy to its headwaters, its origin places, and exploring what you find there.

For example, many creation stories of our world’s peoples describe an origin place of perfection, a paradise, if you will. This is a beautiful place to begin your imaginary journey of joy, for joy. From the Hebrew Bible, to the Hindu scriptures, to the Scandinavian myths, to the indigenous people of Siberia, to the Navajo accounts of First Man and First Woman, we learn of four rivers that emerge at the center of this perfect world and then spread out across the world in four directions. Carrying messages and stories about their source places.

Most of us are reasonably familiar with the story of Genesis in the Hebrew Bible which describes a river that flows through the Garden of Paradise, watering its riches, and then dives underground to emerge as headwaters of four noble rivers. Scholars have identified these as the Tigris, the Euphrates, and less assuredly, the White or Blue Niles and/or the Ganges. In the months to come, we plan to visit these notable waters, their holy lands, their people, their stories.

For this month of Joyful Sourcing, you are asked to play in the deep ancient waters of your own sense of paradise. At least for a few moments every day. It seems possible that this almost universal “mythic memory” of a perfect world contains a potent incentive to bring forth, however we can, in whatever ways we can, those energies of paradise into this world. Now. Today. Not to return to the Garden, but to create it here. Now. Today.

To navigate the waters of your paradise, here is a mythic vessel. 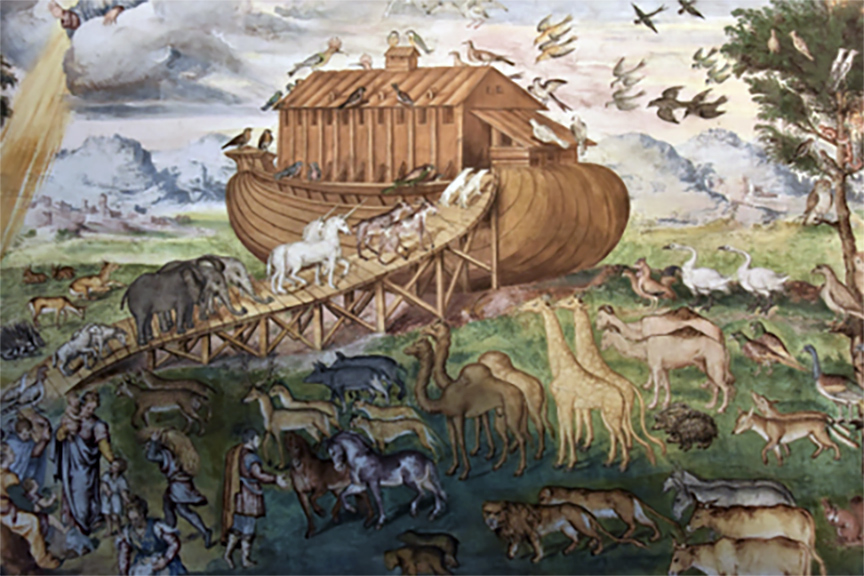 Our ship for this part of the journey is Noah’s Ark. Here is one version of that famous Ark. For our journey, however, during these days of exploring ever more deeply your sources of joy, you are invited to create your own Ark, and fill it with all the beings, memories, thoughts, ideas, images that give you joy, remind you of joy, and offer you joy.

What in this lifetime, in this world has given you experiences that felt like paradise?  Can you embrace them so powerfully that they source joy today’s space and time?

(I am aware that Noah and his Ark come later in the Genesis story than the Creation of Paradise, but when I asked my imagination what kind of craft we might embark upon for a mythic trip to the waters of paradise, the Ark appeared in all her glory, with the invitation to come fill it with joy and the sources of joy.)

Many versions of an origin place speak of a high mountain at its center, as well as a majestic tree, a tree of life, or as the Norse tradition has it, a Cosmic Tree, the Pillar of Heaven. Are there reflections of these images in your version of paradise? Do they offer clues to your ability and desire to stay connected to your own private sources of joy and delight?

Enjoy the journey; bring forth new creations from the rich wisdom of your soul’s true origin in the waters of paradise, from now until February 9, when we will venture out of Paradise, carrying its news, testing our beliefs about joy as we sail along the Nile on Cleopatra’s barge.

Please consider sharing your creations with others who follow the Year for Joy Calendar, below, in the comment area of this posting.

This joyful journey toward paradise has been inspired by Richard Heinberg’s wonderfully evocative book, Memories and Visions of Paradise. 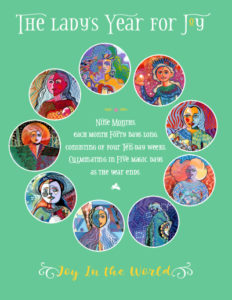 The Lady’s Year for Joy

The Lady’s Year for Joy is your personal guide and journal as you seek, focus, explore, test, recognize, experience, embrace, offer, and report
the truth of Joy in the world.

For you and for gifting your friends — this new calendar will enrich your daily reflections.

Join the Daily Poets via Telephone

In 2010, several members of Jean Houston’s West Coast Mystery School joined to support one another with a daily phone call to ponder the inspirational writings collected by Peggy Rubin. All are welcome to join the calls. For those who wish to join the call at 9 am Pacific time the number is 1-605-313-4818 (new in April, 2019), code 884124#. Read more about them HERE.

Sign Up to Receive Peggy’s Posts on Practicing Joy in the World via Email:

See subscription in footer area, below.